Our city planner, Abby, came this week and gave a presentation about what are important things to remember when creating a city and neighborhood. She simplified her role for the children and described her job as “someone that gets to decide what happens to land in cities and chooses what types of things should go together (bakeries and bike paths) and what should be apart (factories and homes).” Abby showed pictures of things that urban planners like: 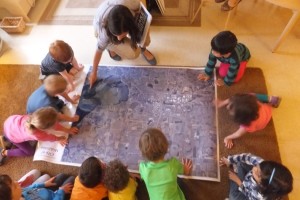 Abby presented the children with an aerial map of Middleton, which the children then quickly started making observations:

Student: Look at all this water!
A: Yep, that’s Lake Mendota.
Student: Are these roads?
A: Those are actually boundary of Middleton.
Student: what is this green part?
A: That’s open space!
Student: are those puddles?
A: Actually, yes! A long time ago glaciers melted and left puddles, but we call them natural ponds.
Student: What’s in the water?
A: Well, this picture was taken when it was really cold out, so what do you think that might be?
All: ICE ON THE LAKE!

After the children described their ideas with Abby, the discussion about how we plan our neighborhood began:

A: So, first, I would think about which types of things might be loud for our neighborhood and try to keep those together.
Student: My police station has a helicopter. That’s loud.
Student: Yea, and my airport.
Student: And my fire station!
A: Yes! And the fire station and police station like to work together too, so we should get those together. Now, you chose to have trees. Trees can actually be a great way to block sound from other areas of the neighborhood.
Student: So we can put my trees here (places them next to the “noisy” buildings).
A: Now that we have trees there, restaurants are nice to have next to trees because you can see nature while you eat or even have a picnic.
Student: How about my Noodle Shop?
Student: And my bakery.
Student: But it still a little bit noisy.
Student: Maybe my garden can be by the restaurant.
Student: Then we should put my parking lot next to the restaurant too.
Teacher: Where should Reuben’s library go?
Student: Next to the garden?
Student: Next to the airport?
Student: That will be too noisy. How about here (across from the parking lot)
Teacher: What about Liam’s bike path?
All: Next to the library!

Later in the Art Studio, the children worked on drawings of places and things they thought would be important to include in a neighborhood. Using their drawings, they had a chance to do some collaborative planning and create a neighborhood of their own, applying the information they learned from Abby. As they were working, they talked about why they thought it was important to include the things that they chose for the neighborhood.

They compared the details of the drawings to ones they drew a few days earlier in the classroom. This helped them to think critically about their work and focus on modifying areas of their drawings they felt didn’t work so well. After they critiqued their work, they drew another version. 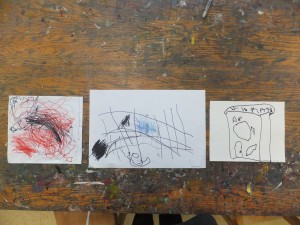 In the image above, the drawing on the left is one student’s first attempt at drawing a library. It is very kinesthetic. In the second drawing, he started using vertical and horizontal lines to represent the architecture. In the third drawing, he focused on using the vertical and horizontal lines that he thought worked well in his second drawing to create a structure. He has included a roof, windows and a door. The lettering on the roof spells “Library”.

Not only did the students stay interested in the same subject over the course of three drawings, they were much more focused as the project progressed. They included more details in their drawings and really seemed to be proud of their work.